This week we organized a round table with people involved in the management of data projects. Mostly data science.

The idea came after the Executives at PyData session organized earlier this year. And discussions with few people on the challenges when trying to deliver data projects.

Ian Ozvald, founder of PyData London, and organizer of the PyData session was present. He's also a trainer and consultant specialized in the topic (one of his courses is coincidentially named Successful data science projects), so his participation was very appreciated. We also had Mehmood Hassan a recruiter from ECOM, who kindly offered to host the session in their offices, and feed us during the event. :) Mehmood contributions were also valuable, bringing a recruiter's point of view in different topics.

The rest of attendees had different backgrounds, like lead data scientists, project managers, and senior specialists in machine learning engineering. They came from a diversity of industries, companies such as Lloyds Bank, Johnson & Johnson, Mercado Libre, ITV or JP Morgan among others.

The first topic that was discussed was about the teams. One of the first challenges is the current terminology. Data science roles are very broad and can mean a variety of things depending on the company. While some progress has been made (new roles like machine learning engineer), this is still a challenge today.

There is a preference in many companies to try to hire people with an unreasonable set of skills. From excellent software engineering skills, to advanced knowledge of machine learning techniques, and great soft skills. There is also a preference of companies to hire only senior people, which makes things challenging in both sides (for candidates and for companies).

One of the companies was using a (probably) rare role, that was a team of experts with the goal of advising and auditing practices in the data projects. Deciding on the feasibility of projects being considered, the recruitment, the skills needed. It was described as similar to project management, but with very high technical knowledge.

Having multiple skills in a team is also tricky. Projects that had only data scientists doing everything (like productionizing) went wrong, based on attendees experience. But there were different cases were having separate teams (data scientists and devops for example) went also wrong, because of the cultural gap. In some cases the development ended up being more adversarial among them, than collaborative.

Participants have also shared accounts of spending quality time with stakeholders not directly involved in the data work, like executives or internal clients. Time spent on introducing concepts, plans, and getting feedback in an informal setting contributed to long term success, i.e. made getting buy-in easier. 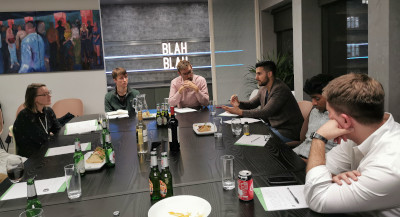 For organizing the teams, the preference was to use Agile techniques as a reference, but everybody agreed that using the same techniques used for software engineering wasn't useful. Kanban, Scrum... were adapted and in some cases the organization was just slightly inspired by them.

One of the variants was to use longer sprints than usual (assuming it's usual to have two week sprints). The sprints were four weeks instead, and they were divided in different stages. For example, the first stage was analyzing the data and planning the next stages of the sprint.

Another variant was to use Scrum managing the uncertainty of data projects by making hypothesis and assumptions. The length of the tasks, the quality of the data... are estimated or assumed, the sprint is planned for that, and for every wrong assumption and extra work, new tasks are added to the backlog. This was successful for one team, but required the people in the team to be senior and experienced.

The main goals by using these techniques, besides of course delivering the expected results, were to have visibility of the development of the project, and to estimate deadlines.

Agile techniques are often based on trying things fast, and failing early. This often does not apply to data science projects, since they may have a big overhead to get started. For example accessibility to the data (regulated institutions may need long processes of approval).

All companies were mainly using the PyData stack for the projects. This is surely biased, given that the organization of the event, and the promotion, came from people from the PyData community.

The preference was to develop the projects in shared infrastructure, and not in the workstations. As an example, 8 Gb of RAM can be quiet good for a workstation, but clearly insufficient for many data projects. Jupyter was the main interface used, and as said, having it on the servers and not locally (using Jupyter Hub) as the preferred approach.

Some of the mentioned tools were:

And for productionizing, tools like Docker or Flask (creating microservices) were named.

There was mostly agreement on building "from scratch" the platform using these tools, and not using data frameworks with GUI... SageMaker was used in some cases.

Persistence of models is mainly done with Python's pickles.

There was also a discussion on how companies see and get involved in open source.

There were also concerns on whether companies care about candidates with good GitHub profiles, because they expect them to work longer hours (since they are used to work for free), and be more motivated.

There were no experiences on companies supporting open source by hiring contributors to work on the projects as part of their job.

The experiences on companies sponsoring events were very positive. Most companies who host events, sponsor conferences seem to see value when they have experience, and they keep recurring. Some have seen the quality of applications to their companies increase significantly, more than the quantity. And candidates usually have a very positive attitude when interviewed by companies they know because they sponsor events.

On the recruitment side, it was also side about the poor experience of many companies, who have unreasonable tests to asses candidates. There was agreement that tests should have a reasonable duration, let the candidate learn things (about the company and the role besides technical things), and useful feedback by senior technical people should be given after it's reviewed.

Regarding the future of the data industry, everybody was optimistic and thought that it will continue to grow, even with the difficulties in delivering results. Companies seem to keep growing their awareness of the value of the data they have.

Some areas that people expect to grow are fairness in machine learning and interpretability.

For the future of our round tables, people found the session useful. Besides sharing experiences, people found very useful to know that other companies have many of the same problems, and that they didn't take a wrong path, and are disconnected from the rest of the industry.

We are likely to organize sessions like this in the future. Several people also shown interest on having them online, since they were not based in London.

If you are managing data projects, and can be interested in future session, feel free to get in touch. You have many ways to get in touch with me at my website.